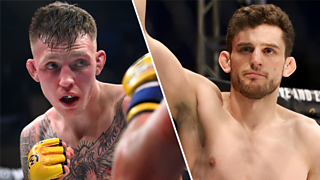 Ballymena fighter Rhys McKee says he feels 'fantastic' as he prepares to headline Cage Warriors 110 in Cork on Saturday night.

McKee, who moves up in weight to welterweight after back-to-back wins over Jefferson George and Perry Goodwin, is set to take on Norwegian challenger Hakon Foss.

"I chose to move up for the good of my health and career," said McKee, 24.

Belfast's Joe McColgan will also be in action. He is set to face England's Robbie Scott in a 160lb catchweight bout.