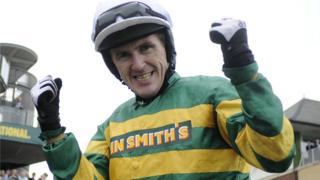 A look back at six of AP McCoy's greatest wins as the 20-time champion jockey retires from racing.

Victory on Makes A Stand at the 1997 Champion Hurdle at Cheltenham was followed a few days later in the Gold Cup on Mr Mulligan.

Wins on Edredon Bleu in the 2000 Champion Chase, Brave Inca in the 2006 Champion Hurdle came before his 2010 Grand National triumph on Don't Push It, before sealing another Gold Cup on Synchronised in 2012.