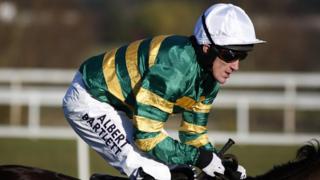 Jockey AP McCoy says he will regret not being able to end his career with 300 winners in a season.

McCoy, 40, announced on Saturday that this season will be his last in racing.

In this in-depth interview with the BBC's racing correspondent Cornelius Lysaght, the 19-time champion jockey said a three-week injury lay-off earlier this season was the "toughest" of his career because it ended his hopes of reaching the 300 milestone.