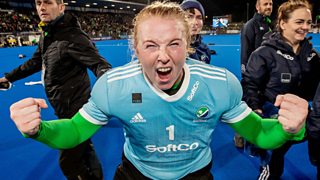 Anna O'Flanagan says that Ireland are not just going to the Olympics to take part after securing qualification by beating Canada on penalties in their play-off.

O'Flanagan believes that the play-off win was just a stepping stone for Irish hockey and she hopes that the sport can kick on in Ireland.

Shootout hero Ayeisha McFerran feels that the recent success of the women's team is down to "years and years of hard work".