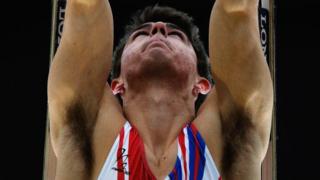 Whitlock misses out on medal

Britain's Max Whitlock says it has been an "amazing" experience after coming fourth in the men's all-round final at the World Gymnastics Championships on Thursday.

The competition in Antwerp is Whitlock's first World Championships, and the 20-year-old said it was "fun" despite narrowly missing out on the medals.

Whitlock will be back in action in Saturday's pommel horse final.

Covid tiers - can your team have fans back?