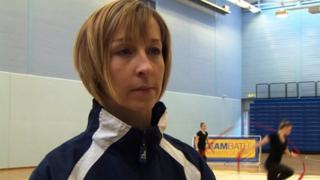 Rhythmic gymnasts over the moon

The team were devastated when they missed a target score set by British Gymnastics at the test event in January and were told they would not be able to represent Britain in London.

They were given the target in order to prove they were competent enough to take part in the Games, but coach Sarah Moon says they were not aware that they had to complete the target score in the first two days and assumed they had qualified when they got the score on day three.

Britain will now send a rhythmic gymnastics team to London 2012.