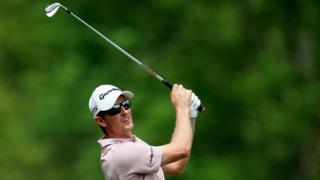 Rose on recovery from 'tricky start'

Justin Rose talks about his recovery from a "tricky start" to shoot a two under par round of 70 in the second round of the Masters.

The Englishman says "the game felt difficult" but that he tried to "create some momentum" as he played the back nine in three shots under par.

Rose goes into the third round on seven under par - seven shots behind runaway leader Jordan Spieth.