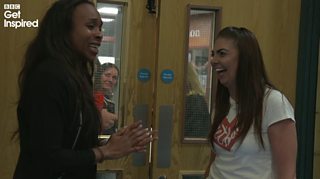 Cookey was there to say a big thank you to Scarf, who works as an autism support manager in the mainstream school during the day and then coaches the team four nights a week.

The squad started off with just five girls but now, four years on, boasts 95 members.

If you know a volunteer who deserves a mention, use #BigThankYou during BBC Sport Personality of the Year and join the nation in applauding the Unsung Heroes of grassroots sport.