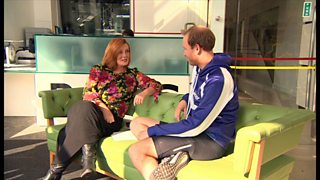 'Someone else's turn to take the crown'

A year ago marathon runner Scott Allen was recognised as an Unsung Hero after setting up his own athletics club in Plymouth called Storm following open heart surgery and learning to walk again.

Since then, Storm has been named UK Athletics' number one running club in the south west, with 1,200 runners taking part over the course of the year, including 330 signed up as UK athletes.

And Scott reflected on one of his highlights from winning the award - meeting his childhood hero Gary Lineker.

As to who would be a worthy successor for the award, he adds: "Age isn't the concern.

"It's got be someone who's out there really volunteering, giving up their time to make an impact and make a difference to people out there in any sporting arena. So, come forward!"

There's not long left to nominate your Unsung Hero - nominations must be in before midnight on Sunday, 23 October - so find out how to here.