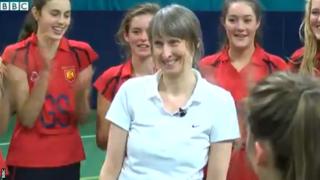 All around Netball star is Unsung Hero

Liz Wisniewski has been involved in netball for over thirty years and over the last 20 she's had a part in almost every area of the sport.

From umpire, to time-keeper, to scorer; she's set up two leagues in Tyneside and overlooks the operation of 90 netball teams in the area.

When asked how she felt, she mentioned it was a "massive honour" and very "humbling."

The BBC Get Inspired Sports Unsung Hero Award recognises and rewards outstanding contribution by individuals at the grassroots level of local sport, who give up their time on a voluntary basis so that sport can be played and enjoyed by people throughout the UK. Over 150 Unsung Heroes have been honoured over the last decade.