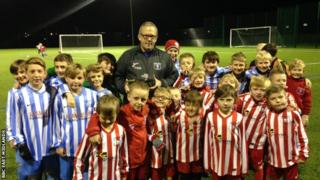 Pete Harris has been announced as BBC East Midland's 2016 Get Inspired Unsung Hero.

Pete is not only a volunteer football coach, but has also help set up and run the Leicester Futsal League - which this season has a massive 65 clubs signed.

When one of his young players had a serious car accident and was in hospital for three months, he was a regular visitor and raised money to support the family.

The young boy's injuries prevented him from returning to the team, so Pete set up an inclusive section at the club for all kids with disabilities.