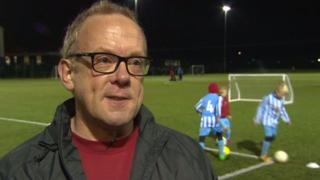 He coaches three teams at Ibstock United Football club, has founded up a regional Futsal league and set up an team for children with disabilities.

Giving up his free time nearly every day, Pete also looks after child protection, safety and coaching standards at his club and has won the FA Charter Standard Club of the Year in 4 of the last 5 seasons.

One of the young players coached by Pete said: "I'd give him five stars!"

Now in its 13th year, the BBC Get Inspired Unsung Hero Award recognises and rewards outstanding contribution by individuals at the grassroots level of local sport, who give up their time on a voluntary basis so that sport can be played and enjoyed by people throughout the UK.

A winner is chosen in each BBC English Region and in Scotland, Wales and Northern Ireland. Each winner then gets the chance to join the sporting stars of today at BBC Sports Personality of the Year 2015 event in Belfast .

Find out how you can get involved in volunteering in a local club.