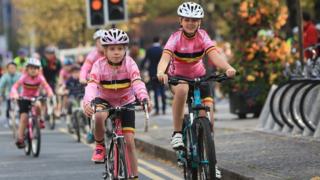 Ciclovía recently came to Belfast, inspiring people to move their lives up a gear by getting involved in cycling.

A number of roads in Belfast city centre were closed to traffic in an attempt to create a temporary traffic-free zone for new and experienced cyclists.

The event was aimed at encouraging more people to leave their cars at home and cycle around the city, along with creating a safe atmosphere for children and people who were less experienced on a bike.

Event director Johnny Davis commented that it was a chance for everyone to get involved and cycle like they were "young and childish" again.

Local MLA Máirtín Ó Muilleoir said it was a chance to "give roads back to bikes", adding Belfast was on its way to becoming a great bike city and cycling was a chance for everyone to see the city in a different way.

If you're tempted to have a go, then have a look at our cycling guide.