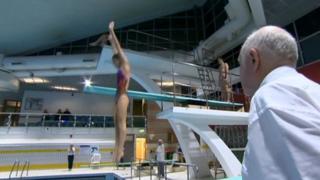 Derek Beaumont, a veteran diving coach from Hertfordshire, has won the BBC Get Inspired Unsung Hero Award for the East region of England.

For over 50 years, he's given his heart and soul to the sport - and produced nine Olympians out of the Hatfield Swim Centre along the way.

"The greatest pleasure I get is seeing the youngsters do well, improving on their dives and then performing in competition," says Derek, who is also well known throughout the diving world thanks to his spells as an Olympic judge.

Now in his 80s, Derek remains an influential figure at the side of the pool every day.