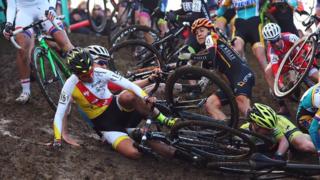 A huge crowd of around 10,000 people witness the first-ever Cyclo Cross World Cup event to be hosted in the UK.

Countryman Kevin Pauwels took the men's title with the leading competitors telling BBC Sport's Nick Hope that they were "overwhelmed" by the "amazing" support and hope the event can become a regular Cyclo Cross World Cup fixture.