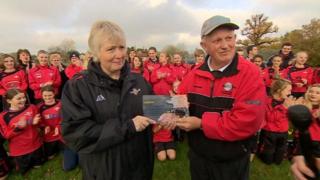 Chris, now 69, helped set up the pioneering club in 1967, making the Spitfires one of the oldest girls teams in the country.

He has spent the last 46 years acting as groundsman, barman and driver while his wife has coached the thousands of players who have come through their set-up.

The Spitfires have gone from having one female team - aged between 12 and 20 - to three senior teams, age groups from 16 to eight as well as a men's team.

Current players and parents of the children involved have called the couple the "heartbeat" of the community.