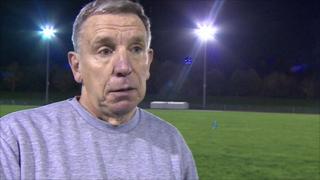 Bernard Wilkins, an athletics coach from Oxfordshire, has won the BBC Get Inspired Unsung Hero Award for the South.

He was nominated by Vicky Tilling, who is part of his training group at Abingdon Athletics Club.

The 65-year-old has been coaching there for 16 years and will now attend the BBC Sports Personality of the Year event in Glasgow on 14 December with the chance of winning the overall UK award.

"It was a complete surprise and to be nominated by Vicky was reward enough," Wilkins told BBC South Today.

"When I got the phone call from the BBC, to say I was flabbergasted is an understatement to be honest. I don't see myself as a hero, I'm still involved in the sport I have loved for 50 years.

"I don't think they would come if they didn't enjoy it. Endurance runner is extremely hard work."

Wilkins has been involved in athletics for 50 years and said becoming a coach was about giving something back to the sport he loves.

"I always intended to get into coaching," he said. "I've been in the sport now for over 50 years as a competitor and a coach so I'd like to think they could feed off my experience.

"I don't run too much anymore, I've got older and slower, but after the athletes have had a good session, I get something out of it, a buzz. It's about putting something back from the enormous amount I've got out of it."