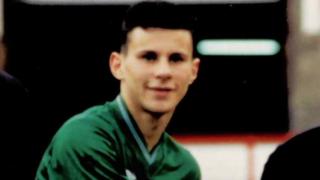 As Ryan Giggs celebrates his 40th birthday, the coaches who first discovered him on Manchester's playing fields remember an "amazing" talent.

Manchester United midfielder Giggs, who made his debut against Everton in March 1991, has played 953 senior games for the club.

When Giggs broke into United's first team, the Premier League did not exist. John Major was Prime Minister and Bart Simpson was number one in the charts.