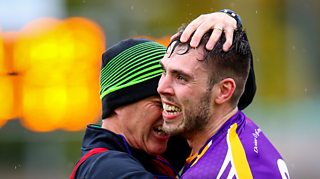 'I didn't know there was extra-time - let alone penalties' - Jones

Derrygonnelly captain Ryan Jones said he had "no idea" there was going to be extra-time let alone penalties in Sunday's dramatic Ulster Club SFC game against Trillick.

The Fermanagh champions won the penalty shootout after extra-time had failed to separate the teams at Brewster Park.

It's the first time a penalty shootout has decided a provincial senior championship match at either club or intercounty level.