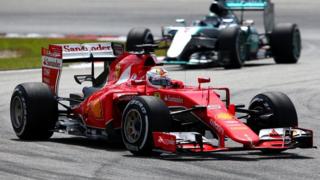 Sebastian Vettel drives superbly to beat Mercedes and win his first race for Ferrari at the Malaysian Grand Prix.

Vettel won a strategic battle as the Mercedes drivers struggled with tyre degradation in the tropical heat, with Lewis Hamilton finishing second and Nico Rosberg third.

The German's victory makes him the most successful driver at Sepang with four wins, and the 34th different driver to win for Ferrari.