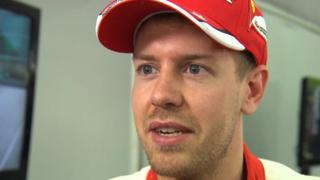 Vettel keen to back up qualifying form

Sebastian Vettel admits he is hoping for wet weather and says it's important that Ferrari take their chance in the Malaysian Grand Prix after a strong result in qualifying.

Team-mate Kimi Raikkonen said Ferrari "got it wrong" and "should have been out earlier" after qualifying in eleventh place and failing to progress from Q2. Team Principal Maurizio Arrivabene admitted to "mixed emotions" as Raikkonen missed out on the top-ten shootout.

Smith was not changing a guard - Paine

Son of a groundsman, brother of a wrestler

'One of my favourite people' - Richards on Milner

Vote for your goal of FA Cup third round