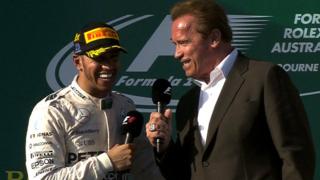 Arnie and Lewis: I'll be back!

Lewis Hamilton shares a laugh with Arnold Schwarzenegger on the podium following the Australian Grand Prix in Melbourne.

The reigning world champion teases the Terminator, saying: "I thought you were taller," with Schwarzenegger responding: "I'm not wearing my high heels."

The Hollywood actor was performing the post-race interviews on the podium at Albert Park, with Hamilton taking victory in the season-opening race.

Groenewegen had death threats after crash