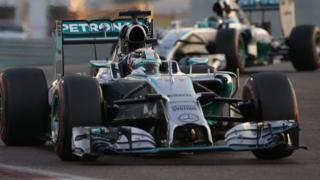 Suzi Perry and expert analysts Eddie Jordan and David Coulthard reflect on the 2014 Formula 1 season and the thrilling battle between title rivals and Mercedes team-mates Lewis Hamilton and Nico Rosberg.

The year also saw an encouraging return to form for the Williams team, but it proved a disappointing campaign for four-time world champion Sebastian Vettel, who was outshone by his Red Bull team-mate Daniel Ricciardo.

This is a live stream of BBC One starting at 23:15 GMT