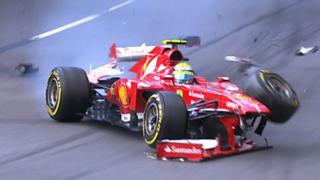 Big crash for Massa at Monaco

The Brazilian hit the outside barrier as he approached the entry to Sainte Devote, before smashing into the impact-absorbing barriers in the run-off area.

The resulting damage forced Massa out of qualifying, meaning he will start at the back of the grid for Sunday's race.