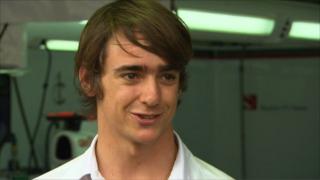 Esteban Gutierrez says he is "ready to take the challenge" of being a Formula 1 driver after signing for Sauber for the 2013 season.

The 21-year old Mexican admits he needs to remain "very realistic" about his chances of success early on in his F1 career, but is nevertheless "excited" to be replacing compatriot Sergio Perez at the Swiss outfit.

Perez is switching to McLaren for 2013, with Force India's Nico Hulkenberg partnering Gutierrez at Sauber and Dutchman Robin Frijns also joining the team as a reserve driver.