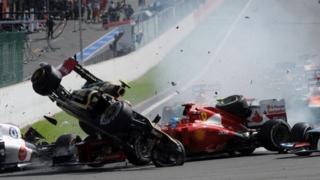 Jenson Button cruises to victory in the Belgian Grand Prix at Spa-Francorchamps in his 50th race for McLaren, ahead of reigning world champion Sebastian Vettel.

Button's 14th career win came after a dramatic crash at the La Source hairpin on the first lap, as Romain Grosjean was involved in an accident that took Lewis Hamilton, Fernando Alonso and Sergio Perez out of the race.

Grosjean's Lotus team-mate Kimi Raikkonen finished in third, ahead of Nico Hulkenberg who recorded Force India's best result of the season so far.