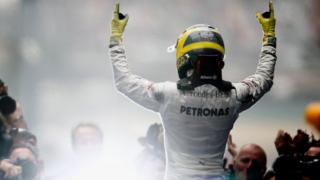 The German led from pole position, controlling the race while a fierce battle for the remaining podium places raged between a tight field, with McLaren's Jenson Button and Lewis Hamilton emerging in second and third respectively.