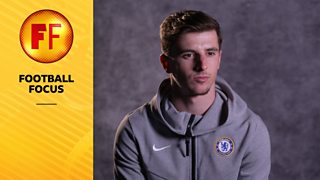 Chelsea's Mason Mount says it's a "tough time" after Frank Lampard was sacked as the club's manager after 18 months in charge.

Chelsea have since appointed former Paris St-Germain boss Thomas Tuchel as their new manager on an 18-month contract.

Watch Football Focus on Saturday, 30 January at 12:00 GMT on BBC One and iPlayer.

England on verge of defeat against India after another batting collapse