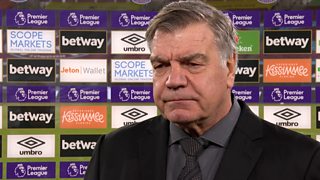 West Bromwich Albion boss Sam Allardyce says the Baggies are "improving" under his management but admits he needs to sign "better quality" players in the January transfer window after defeat at West Ham leaves them 19th in the Premier League, five points from safety.

Watch highlights from the midweek Premier League games on Match of the Day on Wednesday 20 January from 22:45 GMT on BBC One, BBC iPlayer, and the BBC Sport website and app.

Injured Lawes out for rest of Six Nations