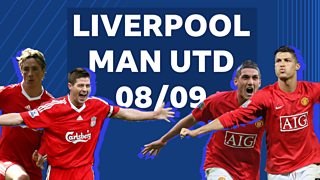 Watch some of the best goals, key matches and memorable moments from the 2008-09 season, the only time Liverpool and Manchester United have finished as the top two in the Premier League, as they prepare to go head to head at Anfield on Sunday.

Watch highlights of Liverpool v Manchester United on Match of the Day 2 at 22.:30 on Sunday, 17 January on BBC One, BBC & the BBC Sport app.