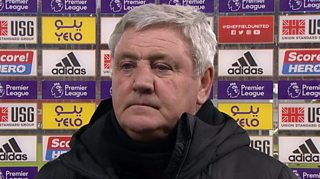 VAR is ruining the game - Bruce

Newcastle manager Steve Bruce says VAR is "ruining the game" after Sheffield United earned their first Premier League win of the season from the penalty spot.

Watch highlights from the midweek Premier League games on Match of the Day, Wednesday 13 December from 22:45 GMT on BBC One, BBC iPlayer and the BBC Sport website and app.

‘Anderson seems to get better and better’

What happened in the FA Cup on Saturday?