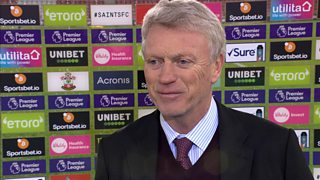 West Ham manager David Moyes says he is happy with a point and clean sheet after his team recovered from a slow start to draw 0-0 at Southampton.

Watch highlights from the early midweek Premier League action on Match of the Day, Tuesday 29 December from 22:30 GMT on BBC One, BBC iPlayer and the BBC Sport website and app.