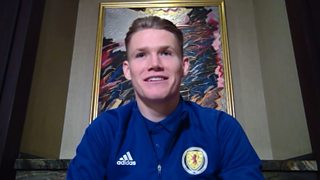 'The best feeling I've ever had on a football pitch'

Scotland midfielder Scott McTominay says watching goalkeeper David Marshall save the decisive penalty in their shootout against Serbia was "the best feeling" he has had on a football pitch.

Scotland qualified for the delayed Euro 2020 - which will be the men's team's first major tournament appearance for 23 years - after winning 5-4 on penalties in Belgrade on Thursday.

McTominay told BBC Newsbeat that "words can't describe" what it means to Scotland after ending a barren streak of 10 missed tournaments.

You can hear more from McTominay on Football Focus on Saturday, 14 November from 12:00 GMT on BBC One, iPlayer and the BBC Sport website and app.

What did Tuchel learn from Chelsea bow?

Morelos strikes as Rangers down Hibs

The most difficult transfer window ever?