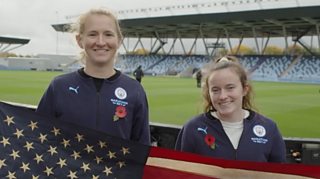 How well do Man City's Mewis & Lavelle know the UK?

Manchester City's American stars Sam Mewis and Rose Lavelle put their UK knowledge to the test in the build-up to the Women's FA Cup final against Everton at Wembley on Sunday.

Watch the Women's FA Cup final between Everton and Manchester City live from Wembley on Sunday, 1 November at 14:05 GMT on BBC One, BBC iPlayer and the BBC Sport website and app.

Fans to be allowed at outdoor sports

Who has had made a legendary impact at Liverpool?