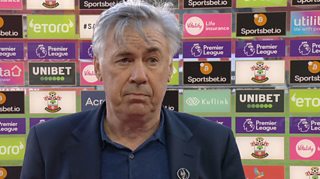 Everton manager Carlo Ancelotti says Lucas Digne's red card in their loss to Southampton was a "joke" and the decision may have been influenced by controversial tackles from Jordan Pickford and Richarlison in the Merseyside derby last week.

Watch highlights of Sunday's Premier League action on Match of the Day 2 from 22:30 GMT on BBC One and BBC iPlayer.

Fans to be allowed at outdoor sports