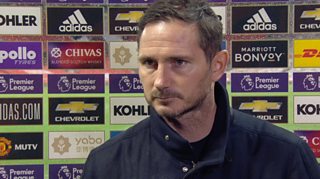 Chelsea manager Frank Lampard is frustrated by VAR's inaction over a potential penalty for a "headlock" by Harry Maguire on Cesar Azpilicueta in his side's goalless draw at Manchester United.

Watch highlights on Match of the Day on Saturday from 22:20 BST on BBC One, BBC iPlayer, and the BBC Sport website and app.