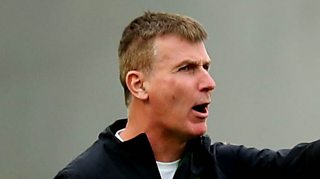 Stephen Kenny says his Republic of Ireland players "showed what they are made of" as they regrouped from losing five more players for Covid-related reasons to draw against Wales.

John Egan, Callum O'Dowda, Alan Browne and Callum Robinson were ruled out on Sunday morning after being deemed to have been in close contact with an unnamed squad member who did test positive for the coronavirus.

"Losing a lot of players on the day of the game and the team changing so much with a lot for the players to take in," said the Republic manager after the goalless Nations League draw.