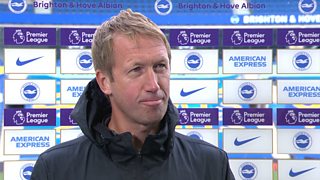 'I've never seen anything like that'- Potter on 100th-minute goal

Brighton Boss Graham Potter praised his side's "courage" and "quality"after they lost 3-2 at home to Manchester United who were awarded a very late penalty at the Amex Stadium.

Potter added that he had "never seen anything like that" after Brighton also hit the woodwork five times during the match and had a penalty overturned by VAR.

Watch highlights of Saturday's Premier League action on Match of the Day from 22:30 BST on BBC One and BBC iPlayer.