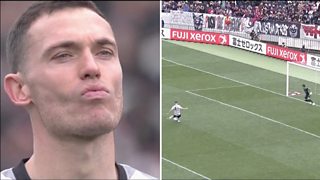 A chaotic end to the Japanese Super Cup sees Vissel Kobe and Yokohama F Marinos players miss nine penalties in a row between them, including former Arsenal defender Thomas Vermaelen.

After the first four penalties were scored, Hotaru Yamaguchi eventually seals victory for Vissel Kobe with the 14th kick of the shootout.

WATCH MORE: Incredible! Is this the luckiest penalty you'll ever see?