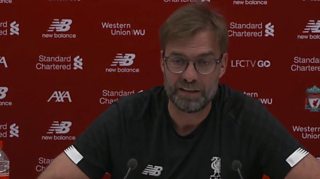 Liverpool manager Jurgen Klopp insists he hasn't been distracted by the prospect of his side setting a new European league points tally after 21 games played.

A win against Tottenham Hotspur in the Premier League on Saturday would see Liverpool reach 61 points, but Klopp says his only concern is beating Spurs.