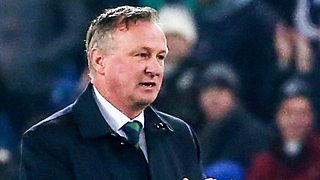 Northern Ireland manager Michael O'Neill says their 6-1 defeat by Germany in Frankfurt highlights his squad's lack of strength in depth.

"You never want to get beaten 6-1 and it was tough, particularly in the second half. There were positives to take but we just don't have the strength in depth to deal with that quality of opposition," said O'Neill.