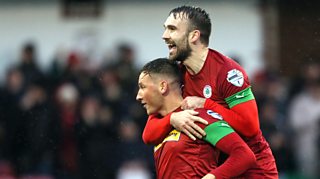 'I don't know how to celebrate' - McDermott on wonder goal

Cliftonville's Conor McDermott says "it's hard to describe" how he feels after scoring from his own half in a 4-0 win over Warrenpoint Town.

McDermott flicked the ball over Warrenpoint's Alan O'Sullivan before letting fly and beating the helpless Berraat Turker with a superb effort.

The defender joked that he didn't know how to celebrate after scoring the wonder goal, and pointed to his left leg in a private joke with team-mate Jamie Harney.