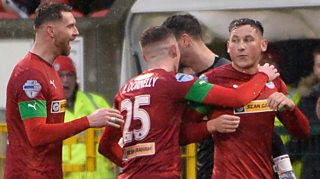 Conor McDermott scores a wonder goal from his own half as Cliftonville ease past Warrenpoint Town 4-0 at Solitude.

Mark McKee, Joe Gormley and Ryan Curran were also on target as the Reds strolled to their sixth league win in a row.

Cliftonville remain just one point off leaders Coleraine while 'Point are still rooted to the foot of the table, five points adrift of second-from-bottom Institute.