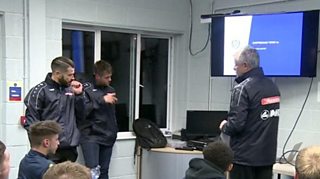 Chippenham Town are relative strangers when it comes to reaching the FA Cup first round.

The National League South club will host League Two Northampton Town on Sunday in just their third appearance at this stage in nearly 150 years.

Manager Mark Collier has left "no stone unturned" in preparing his side while striker David Pratt will hope to "tap-in" to his day-job skills as a plumber by exposing what he hopes is a "leaky" Northampton defence.

BBC Points West's Damian Derrick has been to meet the squad.