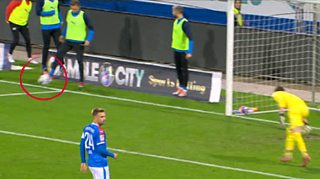 VAR spotted Eberwein kick a wayward shot back into play before it had crossed the line, prompting referee Timo Gerach to give a penalty and show him a yellow card.

International FA Board (Ifab) rules state if a substitute interferes with play, the referee can take appropriate disciplinary action and restart the game with a direct free-kick or penalty kick.