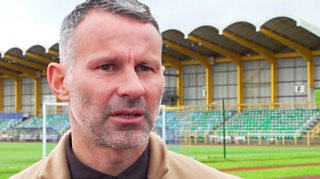 Wales manager Ryan Giggs says he has picked Tom Lawrence for "football reasons" ahead of the Euro 2020 qualifiers against Slovakia and Croatia.

Derby County's Lawrence was charged with drink driving following a crash in September.

Giggs spoke with several people including Lawrence himself before naming him in a 26-man squad.