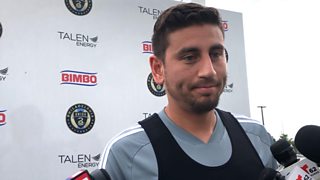 Congress needs to 'step up' on gun violence - Bedoya

Philadelphia Union captain Alejandro Bedoya has urged the United States Congress to "step up" and address gun violence after 31 people died in two mass shootings in Texas and Ohio.

The 32-year-old previously told Congress to "end gun violence" by shouting into a pitchside microphone after scoring in a Major League Soccer match against Washington-based DC United, who play close to the city centre where Congress sits.

Bedoya later added: "I said something that I believe is bipartisan that we can work on... Congress. That includes the House and the Senate, Republicans, Democrats, both sides, everybody. We all need to be better, this whole country as Americans."