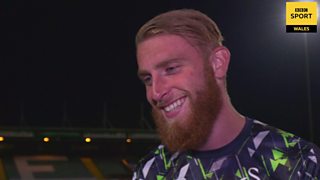 Swansea City striker Oli McBurnie says he is "flattered" by Sheffield United's £15m bid for him but says his head has not been turned.

The 23-year-old scored 24 goals last season as the Swans finished 10th in the Championship.

The Blades, newly promoted to the Premier League, may have to raise their offer in excess of £20m for Swansea to consider letting their key forward go, but McBurnie tells BBC Sport Wales' Rob Phillips he is happy at the Liberty Stadium and it is up to other people to decide.

McBurnie was speaking after Swansea's 6-1 pre-season win at Yeovil Town.