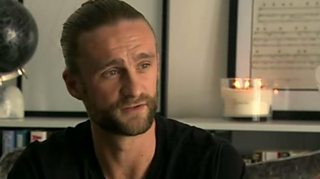 ‘A lot of people are worse off than I am’

Former Newport County defender Fraser Franks tells BBC Wales Today's Tomos Dafydd that he is grateful to be alive after the heart scare that ended his career.

Franks had "flu-like" symptoms before the heart problems that prompted his pregnant wife Stacey to take him to hospital.

The 28-year-old has been forced to retire after Cardiac specialists told him could not continue to play.

From tennis outcast to trans pioneer