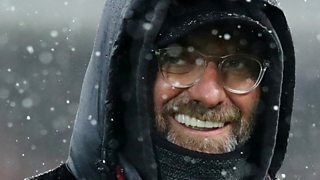 Liverpool manager Jurgen Klopp says his side's counter-attacks were "more defended by the pitch than by the opponent" as the Premier League leaders drew with Leicester on a snowy night at Anfield.

Watch highlights of this week's Premier League games on Match of the Day on Wednesday, 30 January at 22:45 GMT on BBC One and on the BBC Sport website.